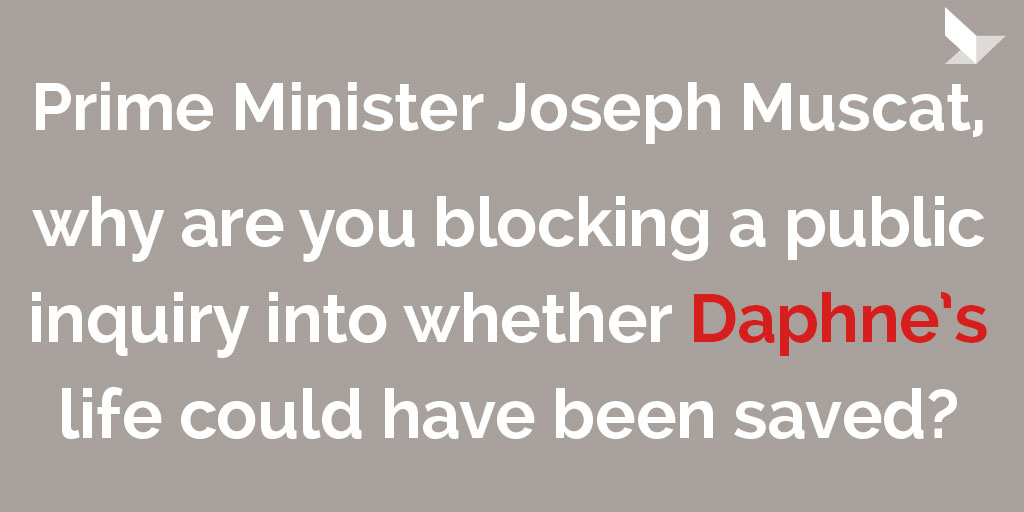 I write to you on behalf of the European Centre for Press and Media Freedom and 22 organisations (listed below) representing thousands of journalists and human rights activists concerning Malta’s response to the assassination of journalist Ms Daphne Caruana Galizia.

Following her murder on 16 October 2017, the Maltese authorities initiated criminal proceedings against the men who allegedly detonated the bomb that killed Ms Caruana Galizia and a parallel magisterial inquiry into whether others should be charged with criminal offences for commissioning the alleged assassins. Both the criminal proceedings and magisterial inquiry focus solely on criminal culpability. Neither process is investigating the wider and even more serious question as to whether the Maltese state is responsible for the circumstances that led to Ms Caruana Galizia’s death.

Article 2 of the European Convention on Human Rights requires Malta – as a Member State of the Council of Europe – to comply with its protective obligation by examining (a) whether Malta knew, or ought to have known, of a real and immediate risk to Ms Caruana Galizia’s life; (b) the adequacy of any steps taken by Malta to guard against that risk; and (c) any steps that Malta needs to take to prevent future deaths of journalists and/or anti-corruption campaigners.

On 9 August 2018, a team of international lawyers from Doughty Street Chambers and Bhatt Murphy Solicitors in London issued a legal opinion finding that Malta has failed to institute any inquiry into whether the Maltese state bears any responsibility for the loss of Ms Caruana Galizia’s life. Following the legal opinion, the family has submitted the following request to your government:

To establish a public inquiry under the Inquiries Act that is completely independent of the Maltese police, Government and politicians, and that is conducted by a panel of respected international judges, retired judges and/or suitably qualified individuals with no political or government links.

We fully support the request and urge you to reconsider your position[1] and to respond immediately and positively to the request of the family of Ms Caruana Galizia. Protecting the lives and voices of journalists in Malta and across Europe depends upon this public inquiry. There is nothing to fear from this inquiry but the truth.

Seeking justice for Ms Caruana Galizia and protection for those who continue her legacy remains our top priority.

We would appreciate your written response to our appeal.

IFEX (the global network of over 100 freedom of expression organizations)

The European Centre for Press and Media Freedom

The World Association of Newspapers and News Publishers (WAN-IFRA)